I know it's been almost 3 weeks, but I thought I would post a race recap none the less. I mean you need to remember your first half marathon somehow right? So the race that I decided to do was actually 3 races in 2 days, it's called the Hangover Half Challenge and it consists of a 5k beer run, a 5k at midnight to "Run in the New Year" and a half marathon on New Year's Day. I did this series with my friend Tiffany, who is crazier than I am and talked me into this. Back in the summer when I was starting to get into shape, she mentioned it and I thought it would be an awesome idea, the problem was that my training didn't go as planned and made for a difficult half marathon, but more on that in a bit. So the plan was to train for 12 weeks and be perfectly prepared. Well, summer through me a curve ball when the restaurant closed and I fell into a pretty deep depression. Even though I know that running/working out really help me to get out of that kind of slump its hard when you're in the thick of it to remember that, so one week turned into a month and I finally started training. Well, it was going great until one day I went to head out for a 5 miler when I tripped on an uneven patch of the side walk and ended up with road rash on both of my hands and down one arm. This was in the first mile, so I decided to try and finish anyway, I ended up heading home when blood started dripping down my arm and off of my fingers. This put me out of running and really any working out for about 3 weeks and I lost a lot of momentum. Well, one thing lead to another and I ended up only having a long run of 7 miles going into the half marathon. The biggest problem was that it wasn't just a half marathon, it was almost 20 miles in less than 24 hours. So, it was quite an undertaking, but onto the individual races. 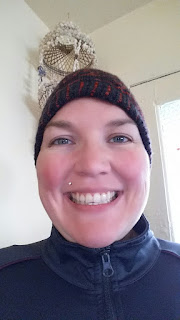 Leaving for the races, all bundled up

Pre-race Selfie for the Resolution Run

The first race was the Resolution Run in El Dorado, which is a beer race. Now, if you've never done a beer race before let me tell you, it's not a great idea if you're not a big drinker, also not so great if you're not used to drinking the beer they're serving. I didn't get sick from this, but we did skip the third and fourth beer stops. That's right, there were 5 be stops, including one at the beginning and one at the end. We had our first beer a good 15-20 min before we started the race so that one had time to settle. At this point, I should mention that they were serving Bud Light, which is by far one of my least favorite beers, but I drank it in the spirit of the event. So we get to the start line, and there were a good amount of people at this one, not sure of the amount, but more than the other 2 races. We positioned ourselves toward the back so as not to get separated by the bottleneck that forms as you go through the arch. It was gorgeous, we got to run through so beautiful neighborhoods and park land and it was right at sunset, so the vistas were amazing. We ran to the second beer stop and stopped to drink and then walked a bit. We made it to the third beer stop jogging at a slow enough pace that we could still talk, great conversation and no ice on the ground so it made for a nice run. We ran past the fourth beer stop and totally ignored that it was there, we got to the alley behind the civic building and I was thinking, "This has got to be 3 miles", but we still had a way to go. We got to the finish line and looked at the trackers on our phone and both said that it was 3.61 miles, A FULL HALF MILE EXTRA! Now this wouldn't be a huge deal if we were just running this race, but we still had 16.2 miles in front of us. I was more than a little annoyed, but really, there's nothing to be done about it. But, we had our last beer and enjoyed the very festive atmosphere in the parks building. Everyone was having a great time and it was an incredible end to the first race of the challenge. 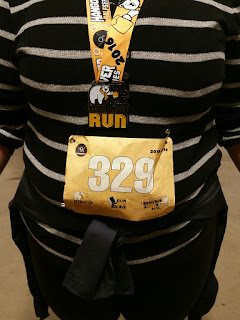 Pre Race Selfie for the Run in the New Year

Once we left El Dorado, we went to downtown Wichita to our hotel which was right next to the boathouse where the next 2 races started. The hotel could not have been more perfectly located. Once we got our stuff put away and had a chance to change we went to the brickyard area for dinner. We ended up at Public and had an awesome dinner of appetizers and drinks. After that, we were ready to go back to the hotel, but I'm thinking next year we need to stay out longer because it was hard to hang out in the hotel and not go to sleep. I have to mention that I am not an experienced cold weather runner and a midnight run by the river in December in Kansas is a cold run. So I loaded up with my fleece lined tights, long socks, running pants, running capris, bra, sports bra, running tank, t-shirt, thermal shirt, sweatshirt, wool cowl, gloves, and hat. That's a crap ton of clothes and I felt like the kid from A Christmas Story, but it kept me warm. Then we headed out across the courtyard to the Wichita Boathouse to start the "Run in the New Year". We took what had become our traditional pre-race selfie and headed out to the starting line. The race itself was great. It was a clear night, which means it was really cold, but the stars were amazing and the moon behind the buildings was awe inspiring. The run was on the river walk and so pretty, but I was super worried I was going to fall in the river. There was a bit of ice under the bridges and on some parts of the race, which was forced walking, I never did fall, which was nice. It wasn't a super eventful race, but an amazing way to ring in the new year. At midnight we could hear the fireworks and got to run over the bridge which was super sy


mbolic, running into the new year, leaving the old behind. We got through that one and went back to warm up, shower and sleep. I have never had a shower feel so good or a bed be so comfortable in my life. 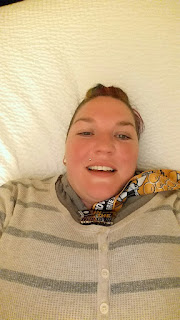 Post Race Selfies after the Run in the New Year

Pre Run Selfie for the Hangover Half

During the race, I was pretty sure I never wanted to run a half marathon again, but all of that changed the next Wednesday. I was sitting in the Algebra 2 class I'm a para for and all I could think about was what my next half was going to be, and how much better I can do the next time. So stay tuned, because apparently I've been bitten by the running bug.
Posted by Bree at 3:07 PM