I have been saving this pic for Valentine's day and I have another, but it's on my camera which is at home so I'll have to load that in later: 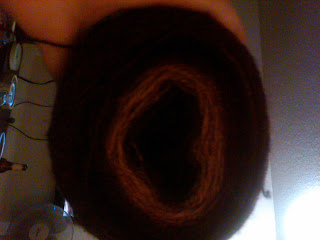 This was a the yarn for a scarf/stole that I knitted for a friend of my Mom's.  It was in a center pull cake wound on my ball winder and had very very long repeats and it made this awesome heart.

I have to say being at work today doesn't put me in the most valentiney mood.  I had plans to make quilted valentines for everyone in the office, but I had a bit of an altercation with one employee in particular on Thursday and it sort of put me off the whole deal.  I have a meeting with my bosses today to discuss this altercation and we'll see how that goes, most usually I am made out to be the bad guy in this office regardless of what actually happened.  More on this later.

We went to California Adventure yesterday with the munchkin.  It was super fun, though we're still trying to get him to overcome his fears of roller-coasters and to stop psyching himself out of doing things.  But all in all it was a great day.

The plan for tonight with the hubby is to make a pork roast with the fig preserves that I made last year, some fingerling potatoes, some chard with lemon and maybe some baked apples for dessert.  I love anytime I get to spend with my hubby and I don't feel the need to go over the top with Valentine's Day.

That's it for now, I do have some sewing projects that I need to post about, hopefully later this week.
Posted by Bree at 9:45 AM 1 comment: